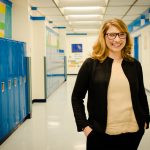 Gretchen LeGrand Gretchen is a passionate advocate for gender and racial equity in tech, and civic technology movements. Her work over the past 15+ years in the non-profit and human services sector has focused on education, workforce development, and social justice. In 2013 Gretchen and her husband (game developer Mike LeGrand) started nonprofit, Code in the Schools, with an after-school club of 20 high school students. Code in the Schools now serves thousands of Baltimore City youth each year through their computer science education programs. Gretchen and her organization also offer computer science workshops, training, and professional development for teachers and librarians regionally, and she frequently presents on the importance of Computer Science Education at conferences around the country, including the US News and World Report STEMSummit, Computers in Libraries Conference, and SxSWEdu. She holds a BA in Liberal Arts from St. John’s College, Annapolis, and an MS in Applied Psychology from the University of Baltimore. Gretchen and Mike live in the Bolton Hill neighborhood of Baltimore with their four kids and two dogs.